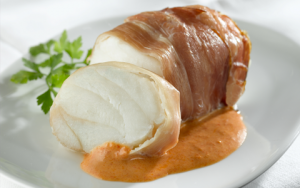 If using the Parma ham, tightly wrap the monkfish fillet with the slices of ham.
(It may be necessary to secure the ham with a cocktail stick)
Place fish on an oiled oven proof tray, and bake in the oven for approx 15 minutes.

While the fish is cooking, remove the skins from the peppers. Place into a bowl with the sugar, vinegar and cream. Blend until smooth, correct seasoning if necessary.

Remove fish from the oven and cut into thick slices with a sharp knife. Arrange on plates and serve drizzled with the red pepper sauce.